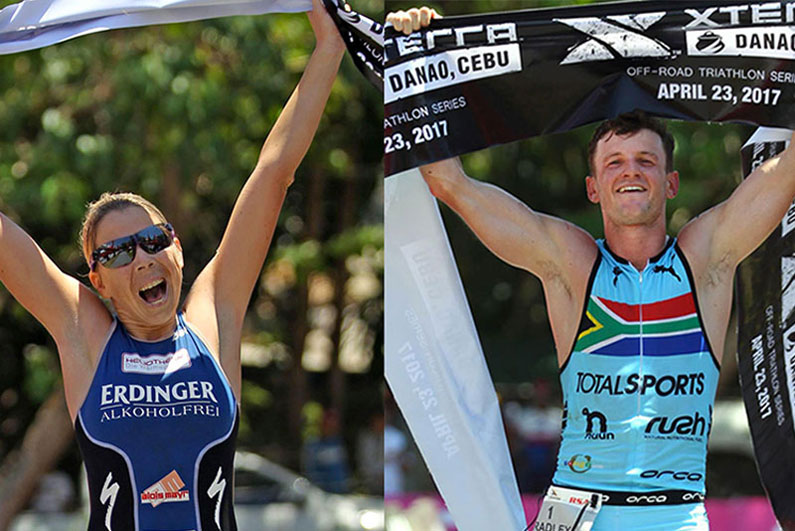 DANAO, Cebu , Philippines – From the rugged terrains of Albay to the steep mountain roads of Danao, South African Bradley Weiss showed his ability to handle the toughest features and elements on Philippine soil.

Conquering what he described as the “hardest and hottest race” yet, Weiss, the 2016 Xterra Albay titlist, dished out a hot performance on a humid Sunday and reigned supreme in the Xterra Danao Cebu race.

“Very tough race. I’ve been racing professionally all over the world for six years now and this one’s probably the hardest and hottest race I’ve ever done,” said Weiss after finishing the challenging 1.5K swim, 40K mountain bike and 10K trail run course in 3 hours, 16 minutes.

It was a tactical race for Weiss, who swam conservatively then let it all out in the pedal part, catching up on and eventually overtaking early pacesetters Kiwi Sam Osborne and Aussie Ben Allen as they passed Batangay Sabang’s steep climbs, fire roads and rocky terrain.

At the end of transition from bike to run, Weiss was already leading by six minutes. He maintained it all the way to the finish at Cebu Technological University, where he waited for runner-up Osborne (3:23:33) to cross.

“It’s so challenging that if you finish, you’ve already done a fantastic job. So to come up with a win is absolutely an amazing result. I couldn’t ask for more,” he said. “It’s my third win in Philippines so there must be something that gives me blessing here. I’ll definitely look forward to coming back.”

Kiwi Kieran McPherson took the bronze in the event organized and produced by Sunrise Events, Inc. with 3:24:27 while the fancied Allen struggled and wound up fourth in the 11-man pro field with 3:44:26, his bid doomed by three cases of flat tires.

“It’s just a bit unlucky and it wasn’t my day. But I never gave up and quit. I’m happy to say I finished the course. To me, it feels like a winner by finishing the race,” said Allen, who later had to check on his wife, Jacqui Slack, who was forced by severe dehydration to call it a day in the bike stage.

“I had a very good race. I managed my speed and made sure I won’t overheat so I wasn’t very tired in the end,” said Wasle, whose two previous bids in Phl was marred by bike problems.