Van Berkel and Eberhardt-Halasz prevail in blazing heat of Vietnam 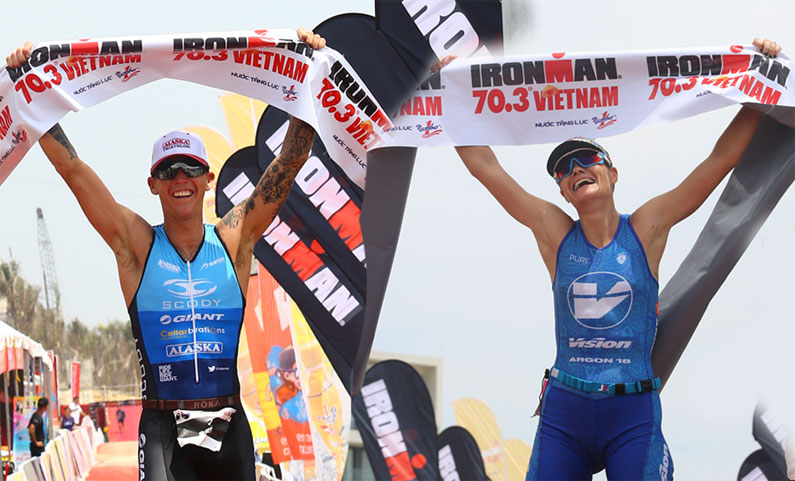 Accomplished Australian Tim van Berkel chalked up his fifth career win over the distance on a blazing day at IRONMAN 70.3 Vietnam.

While van Berkel controlled the race, Hungary’s Anna Eberhardt-Halasz scorched her way through the field on the run to claim what seemed an improbable victory off the bike in the women’s race.

Van Berkel was 14 seconds back on leader Sam Betten (24:50) out of a packed swim and remained solidly in a six-strong group at the pointy end of the bike on the first of two laps.

Double world champion Michael Raelert, chasing his 13th career victory over the IRONMAN 70.3 distance, smashed out a sizeable advantage on the second loop before a puncture cruelly ended his day.

Van Berkel and New Zealand’s Mike Phillips pushed hard off the front of the group with 2:06 efforts over the 90kms to establish a 1:46 buffer on to the run.

While the run skirted the famed beaches along Danang’s waterfront, it provided no cover as the barometer continued to rise.

However van Berkel’s class won through with his 1:20:20 effort over the 21.1km run was easily the best on the day leading to victory in 3:56.19.
He finished four minutes clear of Russian Ivan Kalashnikov who had the day’s second best run (1:21) to push to second with Phillips holding on for third a further two minutes back.

After 15 career podiums and four wins, van Berkel overcame a slow start to 2017 following minor placings at Geelong, Subic Bay and Taiwan before his fifth victory.

“I am pumped to take the win today in Vietnam in really tough conditions,” van Berkel said. “I’ve had a pretty tough last six months race-wise and I really needed this win today. It gives me so much confidence going in to defending my title at the IRONMAN Asia Pacific Championships in Cairns in a month’s time.”

There was drama in the women’s race with Asia-based Australian Dimity-Lee Duke seemingly in control and on her way to victory. She was second out of the swim behind New Zealand’s Laura Wood (31:21) but pushed into a handy lead on the second bike loop.

Duke’s 2:21 effort on the bike was the best on the day, providing a five minute buffer on Eberhardt-Halasz on to the run.

Her advantage was three minutes midway through before the heat took its toll and Duke faded badly over the final few kilometres with victory in sight.

Instead Eberhardt-Halasz managed the conditions best with a 1:31 run, which was six minutes faster than Duke, taking the lead in the final 3kms and winning in 4:34.56. Her ultimate margin was two minutes on Duke with 35 minutes to a distant Wood in third.

Eberhardt-Halasz, who has four previous podiums in Europe, had minor placings in recent months in Asia with fourth in Taiwan, fifth in Xiamen and sixth in Thailand before today’s breakthrough victory.

“I am so excited to take the win. I did not expect to win today which is my first at 70.3,” Eberhardt-Halasz said. “It was a big battle but I was able to break away from Dimity with 3kms to go on the run. I am really happy with my race.”