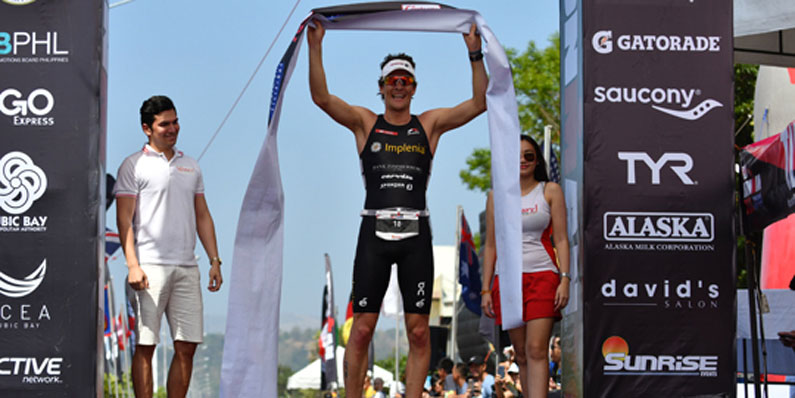 Switzerland’s Ruedi Wild proved that his third place finish in the 2016 IRONMAN 70.3 World Championship was not a fluke, while Czech Republic’s Radka Kahlefeldt’s (nee Vodickova) name change brought with it a change of fortune as both recorded wins at the Century Tuna IRONMAN 70.3 Subic Bay.

Tim van Berkel (AUS) drove the second group on the bike at 1:20 down out of the water. By the half way mark of the 90km bike, Australian Jake Montgomery had pushed the pace to compile a lead of more than a minute which he maintained to T2, followed by Alexander, Reed, Riederer, and Wild, while Raelert was issued a five-minute drafting penalty, but he later appealed and was elevated from seventh place to fourth place.

The young Australian was quickly gobbled up by Riederer, Wild, Reed, and Alexander on the run. But in the hot and humid conditions, Riederer, in only his third IRONMAN 70.3 start, was the first to crack, with Wild taking the lead and holding on to win the war of attrition in 3:48.24 with Alexander second 30 seconds back and Reed in third a minute behind the winner.

Kahlefeldt exacted some revenge on Swiss star Caroline Steffen to reverse their results from last year in the women’s race.

The early stages were a virtual carbon copy of last year’s race, and from the gun the battle between Steffen and Kahlefeldt began. The two separated themselves from the rest of the field during the swim and by the end of the bike had a 4:39 lead over Asian-based Australian Dimity-Lee Duke.

This year, it was Kahlefeldt who had the stronger running legs, overtaking Steffan by almost four minutes. Duke rounded out the women’s podium a little less than 20 minutes back from the leader.