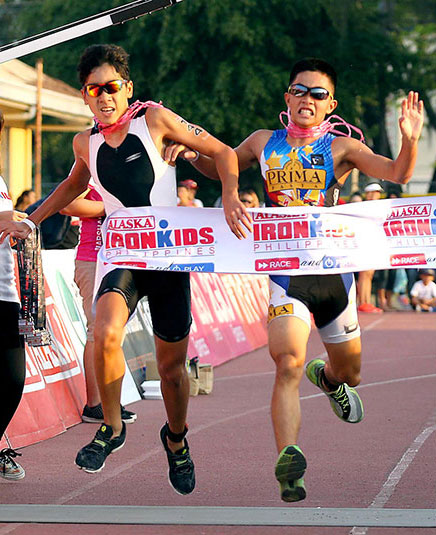 SUBIC , Philippines – Seasoned Australian Craig “Crowie” Alexander gets fired up looking at the crack field of rivals out to snatch his men’s pro crown in today’s Century Tuna Ironman 70.3 race.

“This is an unbelievable field so I think it’s gonna be a great race,” said five-time world champ Alexander, expressing readiness to take on the challenge head on. “I’m a competitive person, I always enjoy competition and adversity.”

A year ago, Alexander gave the young ones a neat lesson by beating them all for the top plum. This came after receiving a pre-race banter about his age.

“Last year, I showed a little bit of disrespect to Crowie. That just riled him up and he gave us all a good spanking so this year I’m gonna give him more respect,” said Reed, who settled for bronze in the wake of Alexander’s charge.

Like Alexander, Caroline Steffen braces for a tough challenge in her defense of the women’s tiara against the likes of Radha Kahlefeldt, Dimity Lee-Duke, Kate Bevilaqua, Sarah Lester, and Imogen Simmons.

“It’s never easy to defend title. I’ll do my best,” said Steffen, a bemedalled triathlete in both the 70.3 and full IM distances.

The 27 pros banner close to 1,000 tri warriors from 47 countries testing their limits in the 1.9K swim, 90K bike, 21K run race that starts at Acea Beach and ends at Subic Bay Convention Center.

Adding star power to the race organized and produced by Sunrise Events Inc. are local celebrities such as Dingdong Dantes, Jake Cuenca, Gerald Anderson, Kim Atienza and Gretchen Fulido, who are entered in the relays.

“We expect a really exciting race not only for the pros but also for the age groupers,” Sunrise chief Wilfred Steven Uytengsu said when he attended yesterday’s presscon along with Century Canning Corp. GM Greg Banson, SBMA administrator Wilma Eisma, and NLEX exec Allan Gregorio.

Meanwhile, veteran Wacky Baniqued took his usual spot at the center of the podium but not before surviving his toughest challenge yet in the Alaska IronKids Triathlon yesterday at Remy Field.

Engaged in a pulsating race to the finish by Clifford Pusing, Baniqued summoned all his strength and will power to reach home first and keep his winning tradition in the circuit for young triathletes.

“First time actually that I experienced a neck-and-neck race here so I’m happy to pull through,” said Baniqued who had won all his three races in the 2016 Alaska IronKids in runaway fashion.

Baniqued got the same clocking (42:31) as Pusing while Russel Mikolai Villaraza wound up third at 44:21.

The 14-year-old Baniqued was running third after the bike phase and made his big move in the 3.2K run.

“I really went all out especially in the last lap,” said the Grade 8 pupil at Colegio San Agustin..

Talisay, Cebu pride Karen Andrea Manayon shared the limelight in event produced and organized by Sunrise Events, Inc. and sponsored by Alaska Milk, with a breakthrough triumph in the girls’ 13-14.