For true sportsmen it’s not just about victory or defeat. Equally important is how you win or lose.

A blazing bike ride took its toll on Reed who was hobbled with cramps almost through the entire final stage of the race.

“I had cramps in the run. I couldn’t really run in my proper stride. The last three kilometers I was just shuffling. My hamstrings just kept cramping and cramping. I was so relieved to get to the finish line. It was really mind over matter,” Reed said.

The victory was the fourth IRONMAN 70.3 win in Cebu for the Aussie. He says racing and winning there is important because of the special bond he has formed with the people of the province. 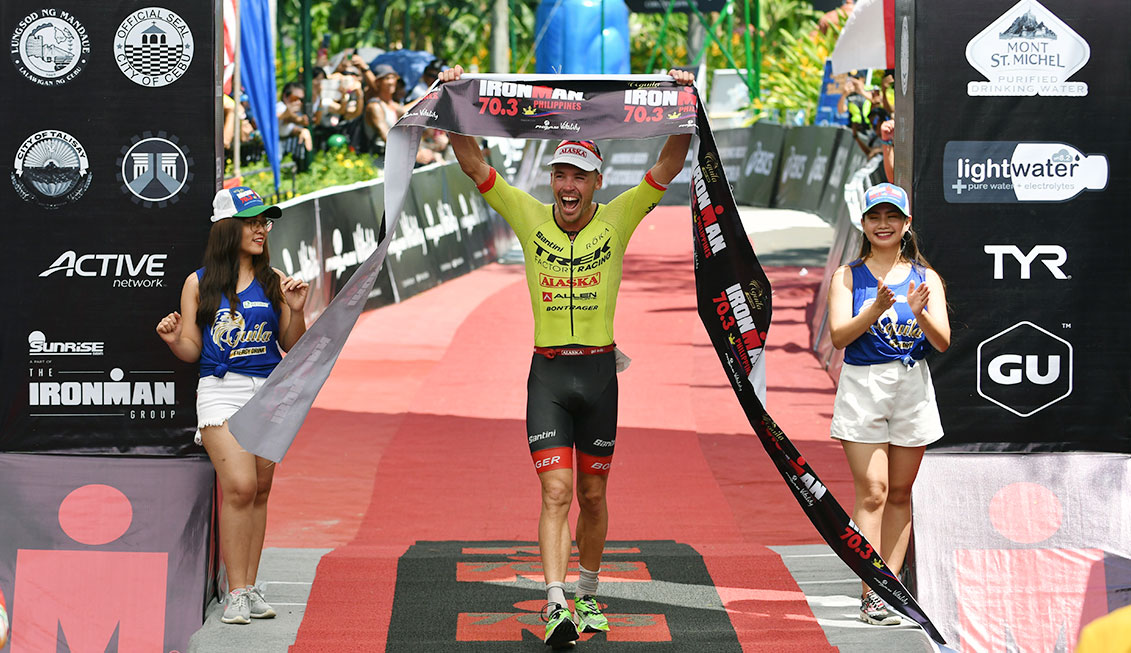 “The only thing that kept me in the race was the crowd of Cebu. The crowd is the best of any triathlon in the world. It’s just an amazing atmosphere. It pushes you to the absolute limit. So I just can’t thank the crowd enough. The people of Cebu. The government of Cebu. Sunrise Events. It’s just such a special race for me,” Reed said.

The two-time IRONMAN Asia-Pacific champion confessed that he wanted to win so much because the race was held in Cebu. In order to win, however, he had to get past 2018 IRONMAN 70.3 Asia Pacific champion Mau Mendez.

“Mau (Mendez) was in my head even before the competition. I was thinking: ‘How will I ever beat this guy?’ So I fell back on the old method of absolutely destroying myself on the bike to try and get a lead because I came to the conclusion that he’s (Mendez) just too good in the heat on the run,” Reed said.

Reed kept close to the leaders in the swim, took the lead early in the bike and then went on to absolutely ride the field off the road. Mendez, who was not at his best, could not keep up with the torrid pace and bowed out without completing the race.

“I’m a bit upset that he (Mendez) wasn’t a factor today. But we all have our ups and downs and I’m sure he’ll bounce back because he’s still a young athlete and he’s a champion. Yeah he’s going to continue to keep improving. Especially in the heat. I’m sure he’s going to be winning a lot of races in the future,” Reed said.

The 2016 IRONMAN 70.3 world champion then endured a brutal run as he shuffled his way through the stifling heat with his muscles cramping. He said that if the race were held anywhere else he would have quit. He was only able to keep going because of the cheers from his Filipino fans who lined the streets of Cebu watching him along the way.

Reed’s strategy worked but he had to pay a steep price as he agonized through the run.

As he neared the finish Reed looked behind him several times just to make sure Mike Philips, who reduced a six-minute deficit to less than a minute, wasn’t sprinting to catch up behind him.

It was no doubt one of the most dramatic victories for Reed and one that he and his fans in Cebu will cherish.