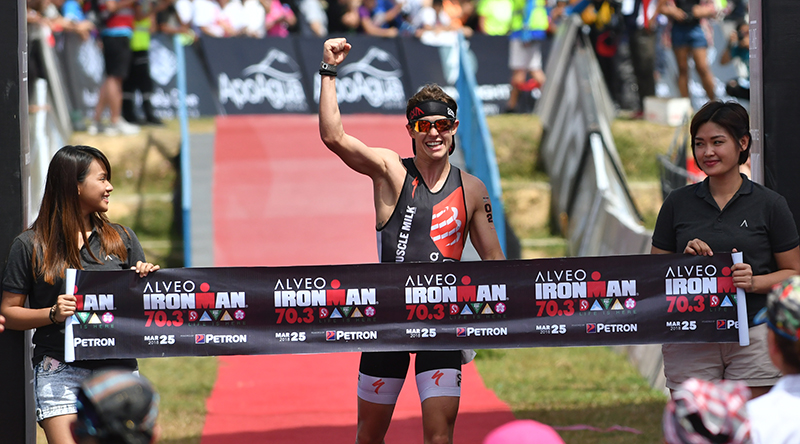 DAVAO CITY – Size matters according to Mexico’s Mauricio Mendez when asked for the secret of his success after he ruled the Alveo IRONMAN 70.3 Davao held March 25, 2018 at the Azuela Cove.

“Maybe it’s because of my size. I’m a small guy. That’s why I can run so well especially in the heat,” said Mendez who overtook three-time IRONMAN Cebu winner Tim Reed at the 13-kilometer mark of the run part of the race.

Mendez expressed his gratitude for the welcome and support of the people of Davao especially the thousands who lined the route and cheered for the participants.

“All the support coming from the people was just amazing. This is what makes racing in the Philippines so special. It’s just the people being there for you all the way of the race. It made all the sacrifice worth it. Sometimes you win. Sometimes you don’t. But you just keep on competing. The support of the people really helped,” said Mendez.

Kahlefedt was ahead of Washizu by three minutes out of the water. Kahlefedt gradually built on that lead and eventually finished more than eleven minutes ahead of the second placer.

Mendez was fifth out of the swim part of the race behind Buckingham, Van Berkel, Reed and Alexander. Mendez still trailed after the completion of the bike ride. Mendez trailed Reed in the early part of the run but eventually took the top spot in the last seven kilometers.

“When I passed him, I never looked back. But that was a hard battle. I was in second place until the final 13 kilometers. The effort was just too hard,” said Mendez who had to overtake Reed winner of three consecutive IRONMAN 70.3 Cebu competitions.

It was the first time the race was held in Davao City. Hundreds lined the shore while the participants started the race with the open water swim. Thousands more lined the entire route of the bicycle ride through three municipalities and the run through the commercial district of Davao to cheer the participants on.