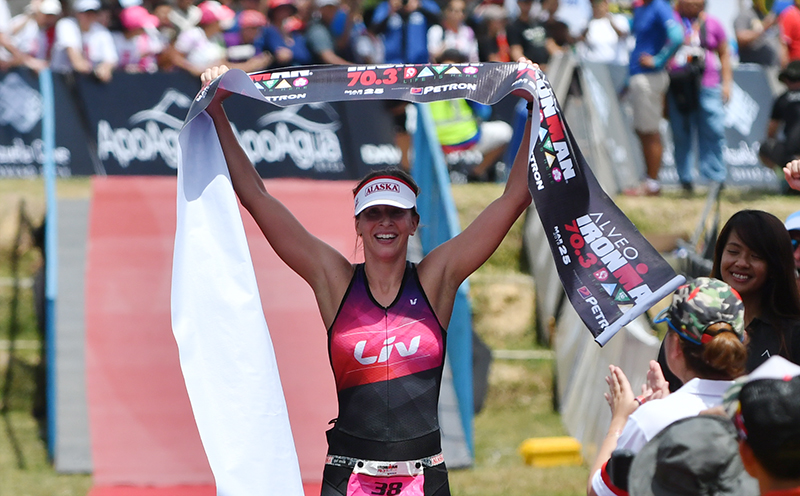 DAVAO CITY – Radka Kahlefeldt, who delivered a baby a few short weeks before the race, showed women can be just as strong if not stronger after giving birth when she won the women’s division of the Alveo IRONMAN 70.3 Davao held March 25, 2018 at the Azuela Cove.

Kahlefeldt, who was smiling broadly while cooling down after the race end, was making a call to check on her baby when she faced the media for interviews.

“I actually gave birth a few weeks ago. I was not able to train very long. You could train early for the swim and the bike but I had to be careful training for the run after childbirth,” she said.

Kahlefeldt broke barriers for women with her victory and will help overcome many wrong impressions about women and giving birth. If they plan their physical activity well women can be just as strong if not stronger even after giving birth.

“Women can be very powerful. But we have to be very careful about training. I feel great. I just love racing. So I signed up for this race. I was motivated to join this race so that I could get back into competition. It worked out quite well,” she said.

Kahlefeldt expressed her admiration and respect at how organizers were able to put up an excellent race in Mindanao.

“I am impressed with how Sunrise Events put up an amazing race. This was their first year in Davao but it was still organized so well. I am terribly happy. I couldn’t ask for a better race,” she said.

Kahlefeldt revealed that the support of the crowd, who cheered her on during the race, played a big part in her performing so well despite the sweltering heat.

It was the first time the race was held in Davao City. Hundreds lined the shore while the participants started the race with the open water swim. Thousands more lined the entire route of the bicycle ride through three municipalities and the run through the commercial district of Davao to cheer the participants.

Mendez is world champion in XTERRA, a series of triathlon races which include swimming, mountain biking, and trail running. He says he is happy to be able to compete in both regular and cross country triathlon.

“This is first time for me to win a 70.3 race. I hope I can keep winning on this distance. But what makes me happy is that I can mix both of them. They are two totally different worlds. They have different demands for you to succeed. I am just happy that I am able to mix them both,” said Mendez.

Kahlefeldt took the lead right from the start. She was ahead of Washizu by three minutes out of the water. She gradually built on that lead and eventually finished more than eleven minutes ahead.